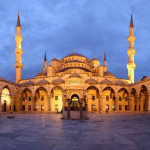 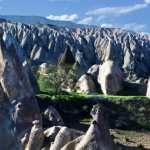 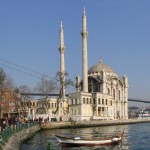 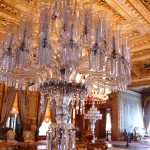 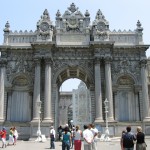 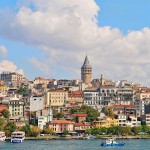 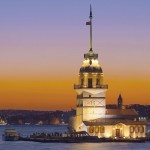 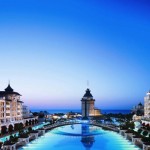 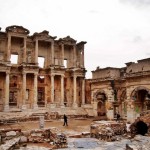 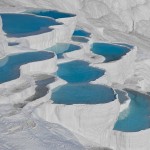 The lands of Turkey are located at a point where Asia, Africa and Europe are closest to each other, and straddle the point where Europe and Asia meet.

Geographically, the country is located in the northern half of the hemisphere at a point that is about halfway between the equator and the north pole, at a longitude of 36 degrees N to 42 degrees N and a latitude of 26 degrees E to 45 degrees E. Turkey, as a country roughly rectangular in shape, has a width of approximately 550 kilometers and a length of approxiamately 1500 kilometers.
Because of its geographical location, the mainland of Anatolia has always found favor throughout history, and is the birthplace of many great civilizations.

It has also been prominent as a centre of commerce because of its land connections to three continents and the sea surrounding it on three sides.

Turkey is generally divided into seven regions: the Black Sea region, the Marmara region, the Aegean, the Mediterranean, Central Anatolia, the East and Southeast Anatolia regions.

The uneven north Anatolian terrain running along the Black Sea resembles a narrow but long belt. The land of this region is approximately 1/6 of Turkey’s total land area.

The Marmara region covers the area encircling the Sea of Marmara includes the entire European part of Turkey, as well as the northwest of the Anatolian plain. Whilst the region is the smallest of the regions of Turkey after the Southeast Anatolia region, it has the highest population density of all the regions.

The most important peak in the region is Uludag (2,543 metres), at the same time it is a major winter sports and tourist centre. In the Anatolian part of the region there are fertile plains running from east to west.

The Aegean region extends from the Aegean coast to the inner parts of western Anatolia. There are significant differences between the coastal areas and those inland, in terms of both geographical features and economic and social aspects.

In general, the mountains in the region fall perpendicularly into the sea and the plains run from east to west. The plains through which Gediz, Kucuk Menderes and Bakircay rivers flow carry the same names as these rivers.

In the Mediterranean region, located in the south of Turkey, the western and central Taurus Mountains rise up closely behind the coastline. The Amanos mountain range is also in the area.

The Central Anatolian region is exactly in the middle of Turkey and gives the appearance of being less mountainous compared with the other regions. The main peaks of the region are Karadag, Karacadag, Hasandag and Erciyes (3.917 metres). The Eastern Anatolia region is Turkey’s largest and highest region. About three fourths of it is at an altitude of 1,500-2,000 metres.

Eastern Anatolia is composed of individual mountains as well as of whole mountain ranges with vast plateaus and plains.

The mountains: There are numerous inactive volcanoes in the region including Nemrut, Suphan, Tendurek and Turkey’s highest peak, Mount Agri (Ararat), which is 5,165 metres high.

At the same time, several plains extend along the course of the River Murat, a tributary of the Firat (Euphrates). These are the plains of Malazgirt, Mus, Capakcur, Uluova and Malatya.

The Southeast Anatolia region is notable for the uniformity of its landscape, although the eastern part of the region is comparatively more uneven than its eastern areas.